Bill Gates is the founder and former CEO of Microsoft. A geek icon, tech visionary and business trailblazer, Gates' leadership -- fueled by his long-held dream that millions might realize their potential through great software -- made Microsoft a personal computing powerhouse and a trendsetter in the Internet dawn. Whether you're a suit, chef, quant, artist, media maven, nurse or gamer, you've probably used a Microsoft product today.

In summer of 2008, Gates left his day-to-day role with Microsoft to focus on philanthropy. Holding that all lives have equal value (no matter where they're being lived), the Bill and Melinda Gates Foundation has now donated staggering sums to HIV/AIDS programs, libraries, agriculture research and disaster relief -- and offered vital guidance and creative funding to programs in global health and education. Gates believes his tech-centric strategy for giving will prove the killer app of planet Earth's next big upgrade.

Read a collection of Bill and Melinda Gates' annual letters, where they take stock of the Gates Foundation and the world. And follow his ongoing thinking on his personal website, The Gates Notes. His new paper, "The Next Epidemic," is published by the New England Journal of Medicine. 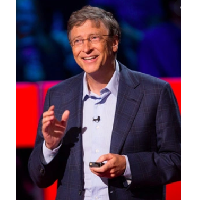 TED, Ideas worth spreading
Recorded: Bill Gates at TED talk: How we must respond to...
Coronavirus
View full course details