William A. Haseltine, PhD is an internationally renowned scientist, biotech entrepreneur, author and philanthropist. He was a professor at Harvard Medical School and Harvard School of Public Health for nearly two decades, where he founded and led two academic research divisions: Biochemical Pharmacology and Human Retrovirology.

He is well known for his pioneering work on cancer, HIV/AIDS and genomics.

Dr. Haseltine is also a pioneer in biotechnology, having founded more than a dozen biotech companies in fields ranging from development of cutting-edge pharmaceuticals to new materials and fuels. He founded Human Genome Sciences, Inc. and served as the Chairman and CEO of the company for twelve years. Eight pharmaceutical products from companies he founded are currently approved by U.S. and international regulatory agencies.

Dr. Haseltine was listed as one of the world’s 25 most influential businesspeople by Time Magazine in 2001 and as one of the 100 most influential leaders in biotechnology by Scientific American in 2015.
He has authored several books and more than 200 manuscripts in peer reviewed journals. He is frequently interviewed by news organizations and called upon by world leaders to provide scientific and policy advice. 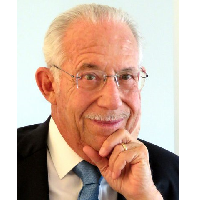